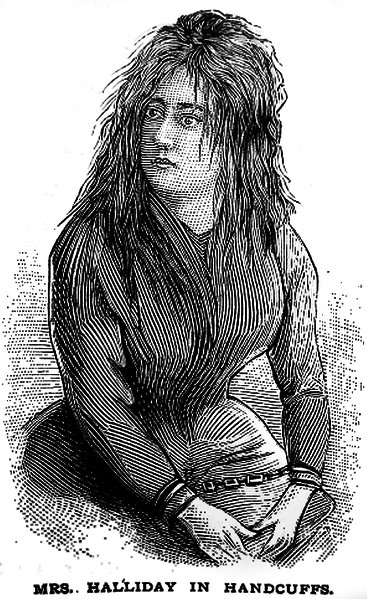 Lizzie Halliday was known to have murdered at least five people before being arrested and sentenced to death, becoming the first woman sentenced to death by the electric chair in early twentieth century America. So awful were her crimes that for a short time it was suspected that she was the infamous Jack the Ripper who had terrorised Whitechapel. (To find out more about the Whitechapel murders listen to our podcasts on the victims and the suspects.) When she died in 1918, The New York Times described her as “the worst woman on earth”.

Lizzie Halliday was born Eliza Margaret McNally in 1860 in Antrim, Northern Ireland. When still only a child, Lizzie, her parents and her 9 siblings emigrated to America. The family settled in New York City, where she gained a fearsome reputation from her violent temper. While this temper made her well known on the streets it also led to her estrangement from her family following numerous physical altercations with family members. She left them, still a teenager to move around the eastern States until she married Charles Hopkins in Pennsylvania. Some sources have suggested that she was only 15 when she entered into marriage with “Kettspool” but the couple soon had a son together. Unfortunately following the birth she entered into a spiral of depression and when she visited her sister she complained that she heard nonstop singing and saw lights flashing around the room.

After only three years of marriage, Hopkins died from typhoid fever and shortly thereafter she entered into a string of marriages. The first was Artemus Brewer who was described by The New York Times as ‘a veteran and a pensioner’, as Lizzie’s choice in husbands tended to be much older than her. Artemus died after less than a year of marriage and her next husband was Hiram Parkinson, but within a year he had deserted her. George Smith, another veteran and a comrade of her second husband, Artemus became her fourth husband but within a few months Lizzie (still known as Eliza at this point) tried to kill Smith by giving him a poisoned cup of tea, she told reporters later that this was due to his revelation that he had killed his first wife by beating her to death, although we don’t know if this was an attempt by Lizzie to defend her actions. Failing in her attempt to kill him, she fled to Bellows Falls, Vermont, taking with her everything she could from their home.

In Vermont, Lizzie married husband number five, Charles Playstel but after only two weeks she left and found her way to Philadelphia where she stayed with family friends who had been McNally neighbours in Ireland. Here she opened a small shop but shortly after opening she burned it to the ground in order to collect the insurance money. Police soon arrested her and she served two years in Eastern State Penitentiary for arson. It was during her incarceration that her son, (the child of Lizzie and Hopkins) who had accompanied her during her now five marriages, was sent to a juvenile institution. Like his mother, he too carried the same violent traits.

Following Lizzie’s release she decided to change her name to Lizzie Brown and she headed to Newburgh, Orange County where she met unlucky husband number six, Paul Halliday. Halliday was a widower living in Burlingham with his sons and originally Lizzie went to his home as a housekeeper but the couple eventually married with neighbours claiming the marriage was only for Paul to avoid having to pay her.

In the spring of 1891, Halliday returned home to find his home burned to the ground and his handicapped son, John, had been killed in the fire. Lizzie informed her husband that John had died saving her but it was soon discovered that John’s bedroom door had been locked and Lizzie had the key in her possession. Despite this revelation, Paul stayed with his wife but less than a month later she burned down his barn and mill declaring that he needed a new one anyway before running off with a male neighbour, stealing a team of horses to aid their flight. It was a short-lived escape as in Newburgh, her companion deserted her, and she was once again arrested. Her counsel entered a plea of insanity, and she was sent to a mental institution where she would stay for a year until doctors claimed she was cured a year later. Lizzie had convinced Halliday that there was nothing wrong with her and he was there to take her home like a loving husband, but just a year later, Paul Halliday was missing.

Lizzie told their neighbours that he was traveling for business, but neighbours and another of Paul’s sons were suspicious. They went to the police to get a warrant to search the property. Lizzie threatened to kill the officers that arrived at her door but they proceeded to search the property regardless. While they didn’t find Halliday, they did find two bodies under a haystack in the barn. The deceased were Margaret and Sarah McQuillan. They had both been shot.

The McQuillians lived just a few miles from Halliday. 74 year old Tom lived with his wife Margaret and their 19 year old daughter, Sarah. On August 26th, 1893 a woman arrived at the McQuillian’s house introducing herself as Mrs Smith and said that she was looking to hire a cleaning lady. Sarah would have normally taken the job but Margaret volunteered instead. A few days later Mrs Smith returned to their house in a panic saying Margaret had fallen from a ladder and wanted to see her daughter desperately. Tom wanted to go himself to check on his wife but Mrs Smith was adamant it was Sarah that Margrett wanted. Another two days passed with no word from his wife or daughter. Tom had grown worried and suspicious so he set out to find the house of Mrs Smith but to his dismay he discovered both the name and the address were fictional.

Around the middle of September 1893, just a few days after arresting Lizzie for the murders of the McQullians, the body of Paul was discovered beneath the floorboards of the Halliday’s kitchen. It was the smell that drew the attention of the police. They found the mutilated body of Paul Halliday. Like the McQuillians, he too had been shot. He had multiple bullet wounds in the chest and had been struck hard on the head, so hard his left eye was knocked from the socket. When questioned, Lizzie spoke gibberish and tore off her clothes. Many considered it an act of faking insanity while others were of the opinion that she was insane. On September 8th 1893,Lizzie was charged with that crime, as well and confined to Sullivan County Jail to await trial.

While in jail, Lizzie refused to eat, and it became necessary for the jail physician to force liquid food through her nostrils. Newspapers reported that in November, she tried to strangle the Sheriff’s wife and a few days later, she set fire to her bedclothes. In December she tried to hang herself with the binding torn from the bottom of her dress and on the 15th December, she came near ending her life by gashing her throat and arms with glass broken from her cell window. Her attempts at suidicde meant that it became necessary for her jailors to keep her chained to the floor. During her time in the county jail, Lizzie became a national celebrity of sorts with her story getting front page coverage in New York and quickly the rest of the US followed suit. On 5th November 1893, she gave an interview in The ‘World  in which she revealed that she was 28 years old, had been married six times and had been drugged by a gang of people she knew, but could not identify in fear for her life and it was the gang that had forced her to witness the killings of her husband and the two McQuillan women.

An Ohio newspaper, The Marion Daily Star went as far as linking Lizzie to the Whitechapel murders in Britain and they published an article on December 19th, 1893 that said-

‘Recent investigation shows that Mrs Halliday is in all probability connected to the Whitechapel murders, for it has been proved that she was in Europe at the time of the murders, and often refers to the murders when she is in possession of her mental faculties, and when she is raving.’

Another paper, The Daily Times reported that Sheriff Beecher had asked Lizzie point blank about her involvement in the Whitechapel murders and she replied  “Do you think I am an elephant? That was done by a man.’ No evidence was ever found that implicated Lizzie in the Whitechapel murders but authorities were in no doubt that they had only found a small percentage of her victims.

Lizzie was convicted in Sullivan County Oyer and Terminer Court and she was sentenced to be executed by the electric chair. She was the first female to be sentenced to this the story caused a sensation and the Governor of New York, Roswell Flower decided to commute her sentence to life within a mental institution instead. Lizzie would spend the rest of her life in the Mattawan Hospital for the Criminally Insane, but she was constantly a source of trouble, attempting to escape a number of times, as well as assaulting several attendants, including nurse Nellie Wickes, who died after she was stabbed more than two hundred times with a pair of scissors in 1906 after she told Lizzie of her plans to leave the hospital for other employment.

Elizabeth Margaret McNally died on the 28th of June 1918 and was buried in an unmarked grave in the grounds of Matteawan State Hospital. Over her life, she married six times. Two husbands died suddenly, two disappeared, one was almost poisoned and another was shot dead. She had killed her step son in a fire while her own son, from her first marriage, was institutionalised. She shot dead two fellow immigrants and stabbed a nurse to death. Looking back we are able to see that her violent tendencies began at a young age and only seemed to escalate. Her possible involvement in the Whitechapel murders was something that the American media were quick to publish but there was no evidence for it. Lizzie’s story helps to prove that female serial killers are just as deadly as their male equivalents.

Support me on Patreon