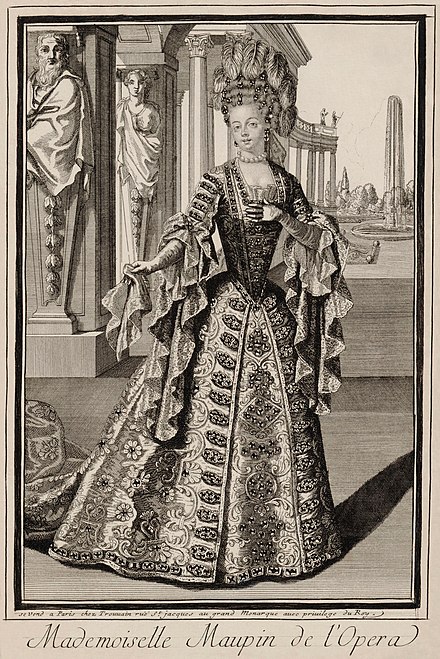 In this weeks post I am looking at Julie d’Aubigny a bi-sexual, cross-dressing, knife-fighting opera singer who might have burnt down a convent to escape with her lover, I say might as there is much about her we don’t know for certain including her date of birth, where she died, or how many of her infamous adventures actually happened.

Julie was born sometime around 1673, she was the daughter of Gaston d’Aubigny and an unknown mother. Kelly Gardiner suggests that she “…lived first in the riding school at the Tuileries Palace in Paris, then moved with the court to Versailles in 1682, and spent her youth in the Great Stables.” Her father was the secretary to Count d’Armagnac and an accomplished swordsman, who trained the court pages, and allowed Julie, who was dressed as a boy, to learn alongside them.

At fourteen, Julie began an affair with her fathers employer, d’Armagnac, who in 1687 arranged a marriage for her to Sieur de Maupin, who has been described as “timid” soon, possibly the morning after they were married he was sent to the provinces as a tax collector, while Julie stayed behind in Paris with the count. Julie soon grew tired of  d’Armagnac, and began a relationship with a fencing master named Séranne, and the couple ran away. Another version of the story tells that the couple fled because Sérannes was wanted for killing a man in an illegal duel. Whatever the case the young couple had very little money and would give fencing demonstrations at fairs and in taverns to survive. Whilst Julie would dress in men’s clothing, she made no effort to hide that she was a woman, and one legend tells that during a demonstration, a man refused to believe Julie was really a woman as she “…was simply too good,” so she removed her blouse to reveal her chest and “…the crowd fell silent.”

Whilst in Marseille, Julie joined the opera company run by Pierre Gaultier, singing under her maiden name, and took singing lessons from a retired teacher, Maréchal until his alcoholism grew worse and he sent her away. At this point Julie had found a new lover in Gabriel-Vincent Thévenard who was also a singer, the two made their way to Paris where Gabriel auditioned for the Opera. He was hired but would only accept the position on the condition Julie be allowed to audition, the Opera, which had already turned her down, reluctantly agreed, and she was accepted.  She made her debut in 1690 in the role of  Pallas Athena in Cadmus et Hermione by Jean-Baptiste Lully. She went on to appear in all of the Opera’s major productions from 1690 to 1694 under the name Mademoiselle de Maupin and became a favourite of the audience, the Marquis de Dangeau wrote that she had “the most beautiful voice in the world”. Although her relationship with Gabriel ended, they remained the best of friends until her retirement, not that they didn’t ever fall out, on one occasion after a ‘spat’ she bit his ear so hard he bled whilst they were on stage.

It wasn’t just men that she had relationships with, during her early singing career she began a relationship with an unnamed woman who had seen her perform. When the woman’s family discovered their relationship they sent her to a convent in Avignon, not one to give up on love, Julie entered the same convent. The story goes that; one night after an elderly nun died, (cause of death not specified) the pair stole her body and placed it in the girl’s cell. They then set fire to the convent, and went on the run for three months. During that time Julie was sentenced to death in absentia under the name sieur de Maupin, as “…the judges couldn’t quite admit the possibility of one woman abducting another – let alone from a convent.” The girl eventually returned to her family leaving Julie to continue her journey alone.

During her travels, another legend tells that Julie, who was once again dressed in men’s clothing, “…literally bumped into a young nobleman, Comte d’Albert, who challenged her to a duel, not realising she was female.” During the duel, which Julie won, she injured him and then nursed him back to health. The two remained lifelong friends and some accounts even suggest he was the great love of her life.

Julie was not one to stay out of trouble, whilst in Paris she attended a court ball dressed in men’s clothes and kissed a young woman on the dance floor, as a result three different noblemen challenged her to a duel. Not one to back down, she fought all three of them at once, beating them all, but victory came at a price, King Louis had outlawed duels, and Julie was forced to flee to Brussels. In Brussels she began a relationship with Elector of Bavaria, but he “…found her a bit too much to handle after she stabbed herself on stage with a real dagger,” so offered her 40,000 francs to leave. Julie didn’t appreciate this and according to the story, threw the coins at the feet of his emissary and left for Madrid. In Madrid, Julie worked as a maid to a Countess Marino, whom she was not a fan of and so one night before a grand ball she “…dressed the Countess’s hair with radishes so that everyone but the Countess could see them.”  She didn’t wait around for the Countess’s reaction and headed back to Paris.

When she returned to Paris, she was able to secure a pardon thanks to the intervention of Philippe I, Duke of Orleans, brother to King Louis XIV. With her pardon in hand she returned to the stage, performing for the court at Versailles and appearing in most major Opéra productions. Not that this meant she stayed out of trouble, legend tells that; defended chorus girls against “…lecherous barons and pompous tenors,” became infatuated with fellow singer Fanchon Moreau, tried to kill herself, threatened to shoot Duchess of Luxembourg, and ended up in court for attacking her landlord.

In 1703 Julie met and fell in love with Madame la Marquise de Florensac, one of the most beautiful, famous, wealthy and well connected women in France, who according to Saint-Simon had been forced to flee to Brussels for “…several years because the Dauphin was obsessed with her.” She and Julie lived in “…perfect harmony for two years, until de Florensac died of a fever,” leaving Julie broken-hearted.

After the death of her lover and the end of her career in the Opera, Julie entered a convent possibly in Provence, where she died in 1707 at the age of 33. One account suggests that her body was “…cast upon the rubbish heap” after her death, how true this is we don’t know, however, we don’t have an accurate location for where she died so we can’t know where she was buried.

At the start of this post, I said that we were unsure of how many of her famous adventures are true and some of this confusion is owed to the publication of Théophile Gautier’s 1835 novel, Mademoiselle de Maupin. In which a character named Madeleine, is based on Julie.

Julie was quite the character who was adored by the crowds despite her affairs with women, penchant for wearing men’s clothing and duelling. She was a woman who followed her heart, never backed down from a fight, even when she probably should have, and defended other women who were not so outspoken. All in all she is someone who deserves to be remembered, and we could all be a little more like her and follow our hearts no matter what society thinks, be sure in our skills, and stand up to those who would diminish us.*

*We are in no way advocating burning down convents or stabbing men who displease us.

Stonewall offers a wide range of help and resources for the LGBT community from help with domestic violence and abuse to bereavement and legal matters.

Located in Manchester, the LGBT Foundation offers a wide range of services to support the LGBT community.

Mental health charity which offers support. Can also be contacted via phone on 01273234839 or email info@mind.org.uk

Resources for teachers and schools with the aim of making schools and educational institutions safe places for LGBT students.

The Albert Kennedy Trust is a national charity focused on LGBT youth homelessness.

Available for users added 16-18. An anonymous online community which allows users to discuss the issues they are facing. There are trained counsellors called Wall Guides who are on-line 24/7. It also has a library of articles, tips, and courses

Switchboard provides a one-step listening service for LGBT people through phone calls, email and instant messaging. In the wake of the Covid lockdown this service is more vital than ever.

Support me on Patreon